Bob’s Burgers goes down the road of replicas in this episode that centers around Tina’s frustration with fellow classmates that determine her well-earned new shirt as “weird.” Tammy and Jocelyn control the news narrative like a mean episode of gossip news and Gene and Louise attempt to help their sister out of her funk in order for them to finally get the delicious boba drinks they crave.

Meanwhile, Bob continues to find upsetting marker graffiti in the restaurant’s bathroom stating that “Bob’s Burgers is poop” or “crap”; either way, it ends up being fecal-related. Linda attempts to juggle figuring out a subject for Tina’s future birthday present while helping Bob to stop focusing on what was written in the bathroom.

While Tina’s story started out as a classic empowered romance, it ends up being a race to rescue her and others’ empowerment in individuality. The story elements of Blade Runner fit really well with everything happening outside of it and Tina’s written narrative. This has to be one of the best-constructed episodes so far (awaiting the second part to be certain) of this season of Bob’s Burgers. The attention to detail in every scene within the futuristic/dystopian story is thorough and adds so much depth to every moment.

I am so insanely impressed by this episode because it truly managed to capture the heart of Blade Runner while maintaining the humor and characteristics of Bob’s Burgers around every corner. Also, it continued to keep my attention when it came to the other part of the story with Bob and the bathroom, not an easy task. A cyberpunk landscape including the personality of Tina is so awesome.

There was a lot of love and attention given to every second of this episode and it’s so obvious when watching this first of two parts in season 12 of Bob’s Burgers. I could go on and on praising this story collaboration, but it might be me ranting for multiple paragraphs with joyous amounts of swearing. Anyways, more good news approaches with the confirmation of a season 14 renewal for the series ahead of The Bob’s Burgers Movie.

🎶 Today is gonna be a great day!
I’ll make another season and blow everyone away! 🎶

The next season is right around the corner, peeps. 🎉 pic.twitter.com/iiuQ27C6XB 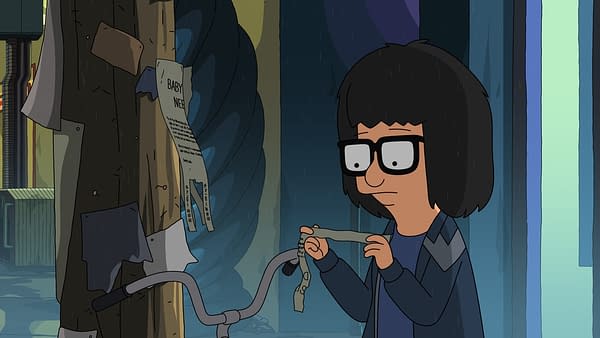 FOX’s Bob’s Burgers S12E21 “Some Like It Bot Part 1: Eighth Grade Runner” is an episode full of detailed environments and continued dedication to the individuality of major, as well as minor, characters. With an amazing eye for the world of Blade Runner within the aesthetic of Bob’s Burgers, I’m beyond impressed and await the second part with intense excitement.