DW’s Meet the Germans host Rachel Stewart had a chat with her to find out more about the Germans’ sex life.

DW: Ms. Thoeren, over the past couple of years, the Germans have spent a lot of time with their loved ones at home — inevitably due to the coronavirus pandemic. How do you think that has affected their sex life?

Regine Thoeren:Unfortunately, it was too often not in a good way… Studies show that there is more violence against women, as well as more violence against children. People are living crammed together in spaces that are often too small. Unfortunately, I have nothing better to report. There is certainly a number of people who have flourished by spending time in close quarters, but it is a minority.

The reason for this was that I would never have dared to enter a normal sex shop myself. But I was curious. And I thought other women would feel the same way. And that’s what led me to open “Lady’s Toys.”

Did people have their reservations?

Yes, it was very difficult. Because as soon as I said what I did, people stopped talking to me. The conversation immediately died. When I was at choir rehearsal, nobody wanted to sit next to me anymore once they knew what my profession was. I then mostly avoided the question and said we could talk about it later. Many also assumed that I was a lesbian and ran the shop only for lesbians. I had to laugh about that. There is actually not much difference: a woman is a woman.

During the first few years, only the district policeman, the mailman and street cleaners stopped by regularly to have a cup of coffee with me. I was very grateful to them since I didn’t have any customers! It was such a hurdle for women to enter the shop.

Did the customers who did venture in want advice?

Absolutely. For example, the women talked about their orgasm problems. Then I said: What problems? Welcome to the club! We are all familiar with that; it’s normal. Then we talked about what caused it and what could be changed. That’s the conversation they were always looking for. That was always the number one topic.

It was a main interest of mine to find out what the needs of the women and men, or the two women, were who came into the shop. And it was so lovely to see them float out of the shop with such a sense of lightness, because they had finally talked about something they had never dared to express before. It’s easier to do this when women and men are first separated in these talks about sexuality. Later on, it might get easier for couples to talk with one another. But first, as soon as a man came along, many women no longer dared to speak so freely. That was very clear. That’s why in my shop there were only two days a week for men to be able to come in the company of a woman.

How old were your customers?

What were the most popular products?

Basically, the most popular products have been vibrators designed for clitoral stimulation. During normal sexual intercourse, the clitoris generally gets the short end of the stick, so to speak. If you then hold a vibrator to the clitoris, the woman enjoys more pleasure. Vibrators have become more and more women-friendly in appearance and handling. Originally, they were almost always in the shape of a penis, and that’s not very popular. Nowadays, they are also available in ice cream cone designs or as macaron cookies, in pink, purple or green. The men in my shop often asked: “Why is everything so colorful here?” Because we women love it!

There even are vibrators in the shape of ice cream cones

Are there differences between German and other women when it comes to sexual satisfaction?

From my experience, I would say that German women suffer just as much as women all over the world from not being sexually satisfied. I had customers from all over the globe, and sometimes we all had a wonderful laugh together when one of the women would comment on her sex life because all the rest of us were familiar with what she said. The ice would then be broken and sometimes it became a really open conversation. In the end, everyone has the same problems and is confronted with the same issues. How it works with men, how men find it easier to have an orgasm, that we women need much more of the “roundabout” — foreplay, after-play, interlude, main-play — and so on. Then, a lot of the women feel relieved, like: Thank God, it’s not only me! The fact that we are so shy, don’t take risks, and think: “Oh God, I’m frigid!” — that attitude is everywhere, in all cultures.

How eager are Germans to experiment?

Would you say it’s become easier to talk about sexuality in Germany over time? 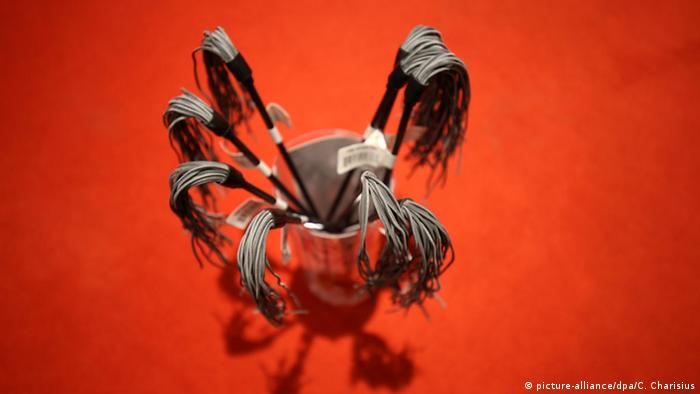 I think that in Germany, there are many things available that help to enlighten people.  There are good books; there are Tantra seminars and swinger clubs where people can live out their desires. But the great majority of people are still very reserved, shy. I don’t want to say: uptight. But they know too little. There’s too little education. More openness and sex education work best in small groups or in personal talks; that’s the easiest. Everyone desires a fulfilling sex life.

Are you confident that sexual freedom and satisfaction will soon become the norm for women in Germany?

I’m afraid not. I myself had a Catholic upbringing where desire was not really discussed. I think that we Christians are very much influenced by the Church. And we didn’t just get that handed down from our mothers and grandmothers, but over the millennia. We women were the servants of men, and it hasn’t been that long since we learned more about our own desires. The female orgasm has only recently been discovered in the history of humankind. Will we ever be truly free? I don’t think so. We have to discover that feeling. Finding a sense of oneself and one’s sexuality is, I think, a life-long task. That’s why it takes most people 50 or 60 years to understand it. I’m one of them.

What advice do you have for women in Germany and the rest of the world?

Go on your path to discovery and talk! Talk to your husband or partner, to yourself, to your friends. Everything will be easier if you dare to expose things from the shadows.

You’ll find more from Meet the Germans on YouTube or at dw.com/MeettheGermans, and check out DW’s cartoon series That’s so German for a humorous take on German culture and stereotypes.