The lost meaning of “Top Gun”

With the long-awaited “Top Gun” sequel hitting theaters in what might be the most anticipated blockbuster in years, it’s worth revisiting an earlier critique of the original that’s still prevalent today. In the late ’90s or early aughts, if the movie “Top Gun” came up, someone would be bursting with newfound zeal to educate you on what the film was really about – and that was, why of  course – repressed homosexuality.

The theory was based on two pillars: a half naked Iceman (Val Kilmer) getting very close to a half naked Maverick (Tom Cruise) during the locker room scenes to bitingly decry that he’s “dangerous.” And, of course, ladies and gentlemen of the jury, those volleyball scenes. “See how the camera lingers on the  glistening abs and tight jeans of Tom Cruise! It’s all about the unspoken homoerotic!”

Part of this theory’s ubiquity came out of a need to release the massive bear hug with which “Top Gun” had wrapped around pop culture. The ode to “F Yeah!” masculinity in “Top Gun” was so loud and fever-pitched, that armchair Gen X cultural critics could not resist the urge to drown it out with a half in jest, half serious counter melody that cried out, “Don’t you see! They’re all just gay!”

The film is a Trojan Horse. It lures you in with its soaring jets and  preening male fighter jocks, but the real story is one about male vulnerability.

Others in the culture had floated this notion. When the film came out in 1986, New Yorker film  critic Pauline Kael had labeled it a “shiny homoerotic commercial.” And then Quentin Tarantino acting in the1994 indie “Sleep With Me” had a whole riff on the supposed gay subtext of the  movie and how it was about Mav’s “struggle with his own homosexuality.”

So prevalent was this idea that in 2016 Yahoo! News did an article on it and pressed Jack Epps Jr., a co-writer on the film, whether it was true. And then last May, for the 35th anniversary of the movie, Vulture got in on the riddle and asked Jerry Bruckheimer, the producer of the film, about the conjecture.

What the critique overlooked though, and what many who have not seen the original in many  years have forgotten, is that the film is a Trojan Horse. It lures you in with its soaring jets and  preening male fighter jocks, but the real story is one about male vulnerability. As millions get  excited to see the sequel and revel in watching Mav “kick some ass!” it’s instructive to see that the original is not about the macho mystique, and nor is it a sly, reductive Easter egg about sexual repression. “Top Gun” explores something much larger and more timely for today: the complex sensitivities of men.

Nonsense, you might say. “Top Gun” is about Goose and Mav singing “Great Balls of Fire!” Or Mav gunning his motorcycle! Or Mav giving an upside-down bird to the Russian pilot!

But then you don’t remember that “Top Gun” begins and ends with a panic attack. The very first scene of the film is a pilot who is about to disintegrate into an abyss of terror. His vision blurs, his face caked with sweat brought on by crippling fear. Mav gamely helps steer the pilot, barely, back to the aircraft carrier but for the film, what’s at stake has been set: How does a man deal with his fear?

Want a daily wrap-up of all the news and commentary Salon has to offer? Subscribe to our morning newsletter, Crash Course.

And at the end of the film, it is Mav who has the onset of blurry vision and terror. When we think of the end of “Top Gun” we might recall the blithe violence and “Team America”-esque spirit with which Mav giddily shoots those Russian MiGs into oblivion. But what we should remember is the moment of terror that precedes it.

Tom Cruise has rarely acted with such vulnerability as he does when he reacts to Goose’s confession of just how afraid he is.

In our current age of anxiety, the original “Top Gun” asks the pertinent question: How should men deal with their fear? What do they do when looming panic, and the fear of panic, can literally overwhelm them? And “Top Gun” (yes that “Top Gun”) actually provides some serious answers.

Have fun. Mav initially at least can maintain an imperviousness to fear by remaining playful. He sees flying as an outlet for sheer pleasure, one where antics must be pursued not just because they are fun, but because this mind for play can stave off terror.

Nurture friendship. It is his profound love for Goose (Anthony Edwards) that keeps Mav grounded and able to avert fear. Tom Cruise has rarely acted with such vulnerability as he does when he reacts to Goose’s confession of just how afraid he is. Cruise plays the moment as if rocked to his core, and he replies with profound sensitivity when he reassures him, or at least tries to (you can see his doubt creeping in as he says it), “I’m not going to let you down.”

It is this sensitivity that is central to the movie. The love relationship between Mav and Kelly  McGillis’ Charlie, a story which, importantly, is never incidental but central to the story, begins  not as some would remember it – during the goofy karaoke Righteous Brothers moment – but rather when Mav hears Otis Redding sing “Sittin’ on the Dock of the Bay.”

Again in a moment of tremendous vulnerability, Mav recalls how his mother used to have him  play the song “over and over again.” And Cruise lets down his guard completely, recalling a moment of great connection to his mother, one that leaves him exposed with real feeling.

And it is this raw emotion that courses throughout the story. Mav mourning Goose’s death. Mav mourning his lost father’s death. Mav mourning the loss of his love. There is so much grief in the original “Top Gun” that the music is steeped in it, making it feel more like a sun-soaked opera than an action movie. Most people remember the cocky, insipid Kenny Loggins tune, “Danger Zone” as the sonic touchstone for the movie. (After all, they misremember that it’s a film about bros being bros, and so they recall that bro anthem and its “highway to the Danger Zone!’ )

But if you watch the movie again, you’ll see that the music that gets the most play are two  others: “Take My Breath Away” a sumptuous, stirring ballad by the German band Berlin (and  one of the best songs ever written about the perils and thrill of falling in love); and the  instrumental piece “Memories” by the synth pop composer Harold Faltermeyer.

And its the piece “Memories” that plays throughout the most critical part of the movie, like a  Wagnerian leitmotif (Faltermeyer is German after all). The song is a very simple melody that is plunked out on a keyboard as if by child – and it throbs with sadness. It keeps repeating, building slightly more each time, the longing in the piece becoming more insistent with each refrain.

RELATED: What “Top Gun” has in common with “The Odyssey”

The repetition of that piece of music is central to unlocking the meaning of the movie. For the  piece underscores how vulnerability – nurturing and releasing it – is a crucial step for the hero’s (or anyone’s) growth. After Goose dies, Mav is only able to fly again when he takes some steps towards his grief, towards his feelings. (This is when we hear this music “over and over and over”). We do not see Mav have a conversation where he talks it all out or rationalizes his feelings about Goose, where he gets some distance. Instead, we see him get closer to his feeling of loss. He wraps himself in loss. 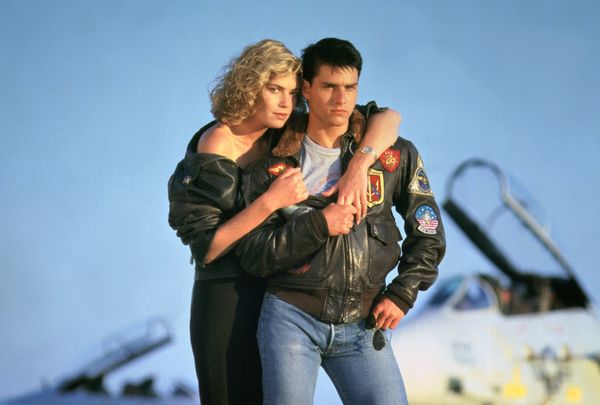 And there’s a lesson here for us, in our hyper-isolated, hyper-competitive era. Mav at the end of “Top Gun,” is no longer interested in being the best, or being alone. He eschews the meritocracy and the alienation that it can lead to. Instead he has gotten closer to himself, to his feelings, to his loss, not to avenge them, but to simply feel them. And it is this feeling, and acceptance of his feelings, that allows him to reenter the world, this time as a collaborator.

As young men gather across the country in excitement to be “bros” and watch jets and Mav do manly, tough acts of daring, and as critics of this kind of “toxic masculinity” recoil from such  displays, it’s worth recalling that the original “Top Gun” was so affecting and its power so lasting because it ultimately was about not a man in flight killing things, but getting to know his wounds and living with them.

More stories to check out: